This section explains the Visual Formatter project structure, as well as the types and components available in the tool.

After selecting the Visual Formatter option from the actions list, you will be prompted to select a Project name and an Item name.

The item is represented by a single chart and can have 2 different types:

The project represents a list of items. Every project starts with a single Formatter item, but can be expanded by adding more formatters and dispatchers as desired by the user. The item that will execute can be changed at runtime using the Datalogic SDK APIs.

For input connectors, you can specify a data type value directly inside the nodes representing various Operations. You can also drag and drop the Constant block of the Parameters tab inside the flowchart area, as shown in the video below.

Inside the chart you can specify some input and output nodes. The inputs are set when a barcode is read and will be manipulated depending on the connected operations. The outputs are set at the end of the chart's execution, if they have been connected to other nodes. Some inputs and outputs are predefined, but the user can also add custom nodes, called Properties in the Datalogic SDK. These nodes can be inputs, outputs or variables representing both an input and an output node (for example, a counter that is incremented after each successful read). You can add inputs, outputs or variables by dragging and dropping the Input, Output or Variable block of the Parameters tab inside the flowchart area, as shown in the video below.

In order to create custom nodes, also called properties, you need to specify the following info:

All the custom nodes will be available in the Datalogic SDK APIs through the list of properties available for every item the project contains.

Each operation is represented by a node with inputs and outputs. The inputs and outputs are shown as circles with an internal color that represent the type of input/output to use and have a unique name. The inputs can be connected to other nodes outputs, as well as to input blocks or constants, while the outputs work in the opposite way. The inputs can also be initialized without an explicit connection by using the UI component to the right of the name. Below the graphical representation of the SubString node is shown. 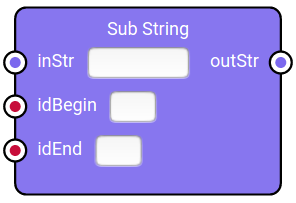 Operation nodes are divided into subsections depending on the type of operation executed. Every subsection has a different color to help during the editing of the formatter flow.

NOTE: The array type is identified as a rhombus in the input or output connectors of a block.

The currently supported feature levels are:

Below the table with the scanner service versions from where the specific feature level has been introduced: